Last week I had the unenviable task of culling the life of my mother-in-law, aged 81. In some ways I was the perfect person for this task, because in my sister-in-law’s garage there were 32 banker’s boxes of files that needed to be sorted through in just under 72 hours, because we were relocating her from Colorado to Virginia on short notice. Who better than a historian to do the work of pulling the significant items out and saving them?

Because she was the keeper of the family history, several of those boxes were filled with scrapbooks, photographs dating back to at least 1870, documents from a relative’s Civil War service in the Army of Northern Virginia, hundreds of more recent snapshots, an edited set of letters sent home from the American campaign in North Africa, Sicily, and Italy in 1943-44, a series of photographs from my mother-in-laws years as a student at Sweet Briar College in the mid-1950s, and love letters exchanged with her second husband (to whom she was married for more than 30 years).

Plenty of the documents were easy to identity, but almost all of those easily identified were texts. The photos, not so much. Some had scrawled notes on the back, but most did not. I would ask my mother-in-law, but she has dementia and has a difficult enough time remembering me, much less who is who in a photograph that is more than 100 years old. 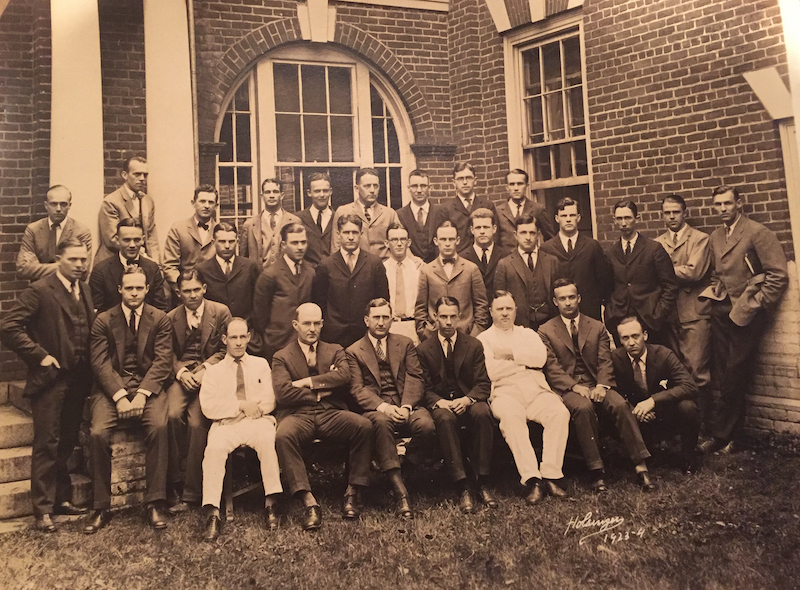 My wife was at least a little help. She could identify her grandfather in this photograph from his undergraduate years at the University of Virginia.  I happen to know a little bit about his life, but almost all of it in the last two decades before he died. I do know he attended UVa and went on to the Harvard Medical School. After that he returned to his native Lynchburg, Virginia, where he practiced medicine until he retired. And I can pick him out in this photograph, because he looks so much like my brother-in-law. But beyond identifying him and knowing that this was an undergraduate fraternity of some sort, I don’t have a clue about anything else in the image.

And so I’m left to cull her life down to one banker’s box of texts and images, most of them identified, but many not. The rest, well, they’ve entered the dustbin of history. In the end I’m left wondering if it is easier or more difficult to cull the record of someone’s life when you are a historian.