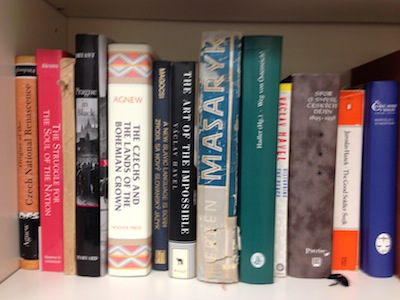 “History has been and remains a book-based discipline…” This phrase, that begins the third paragraph of the recent statement by the American Historical Association on dissertation embargoes, has been rattling around in my head for weeks, like that annoying song from high school you just can’t get out of your head.

If you followed the controversy that ensued after the AHA issued this statement [search on “#ahagate” for more], you know that much of the often heated discussion centered on two issues: was it a bad idea for recent PhDs to embargoe their dissertations, and what did the AHA’s position on the issue say about the Association’s position on open access more generally?

Both of those topics have now been pretty well beaten to death in the blogo- and twittersphere, so I’ve been at a loss to explain why that phrase won’t get the heck out of my head. Fortunately, I’m teaching my Clio Wired grad seminar, starting tonight, so I had to focus hard on all things digital history over the past couple of weeks and in that focusing I finally figured out what my problem was. (I know you’re relieved.)

You see, regardless of what we might think about open access, or dissertation embargoes, or any of the other issues that came up in the ahagate conversation this summer, if we accept that history has been and remains a book-based discipline, then we are accepting that the book is the standard by which historians should be judged for such things as jobs, promotion, tenure, raises, etc. For our professional association to make such a bold defense of the book as the gold standard is more than just counter productive, it’s really out of touch with the realities of the history job market our MA and PhD grads find themselves in.

Don’t get me wrong. I love books. Really love books. Don’t believe me? Come to my office and take a gander at the overflowing shelves. But my bookophilia doesn’t extend to my definition of what it means to be a historian in 2013. And, yes, I know the AHA doesn’t ignore the fact that lots of historians do lots of things that never involve publishing a book or even a peer reviewed article. But still.

“History has been and remains a book-based discipline…” Saying this so directly is to take a position that the book is the goal, the standard by which historians are to be measured. If that is so, those historians who choose to build their careers around museum curation, or website development, or public history, or any number of “altac” career paths just don’t quite measure up to the book (gold) standard promoted by our professional association.

And that just makes me sad. Sad for everyone who is a historian and never publishes a book and so is somehow not quite up to snuff, and sad for the AHA, because, well, emphasizing the bookishness of our discipline is just so 1990.

4 thoughts on “Historians and Books”