The March 2014 issue of Perspectives includes a very clear analysis of the most recent IPEDS data on history BAs by Allen Mikaelian. Everyone currently teaching college history or planning to do so should read this article.

Why? A quick glance at this graph should at least given one pause. 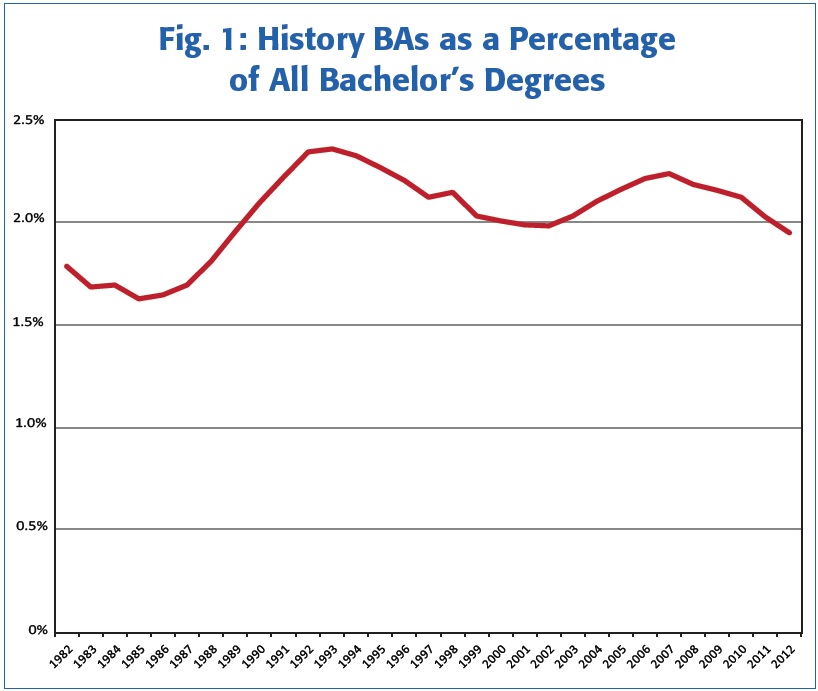 What is shows is a five year decline in history’s share of all bachelor’s degrees awarded in the United States. In the data analysis business, we call this a trend. In an era of stagnant or declining funding for colleges and universities, this is a particularly bad moment for history departments to be smaller players on the enrollment stage. While the overall number of bachelor’s degrees awarded in history is actually up slightly, deans, provosts, and campus accounting types all take note of a discipline’s relative share of resources provided and consumed and so graph results like this one are a real (not imagined) problem.

As I have written previously, one reason for history’s relative decline as a share of overall degrees awarded is the inescapable fact that, at the undergraduate level, our discipline has a gender problem. The 2011-12 IPEDS data (the most recent available) show that 57 percent of all bachelor’s degrees in the United States were awarded to women, but only 40 percent of degrees in our field went to women. That’s a problem. And it’s not getting better. The IPEDS data show that history is also getting whiter by the year, even as higher education as a whole is becoming more diverse by the year.

I’ve spent a lot of time in university administration over the past five years and one thing I know for sure is that a measurable decline in degrees awarded is something that gets noticed, even if that decline took 25 years. There just aren’t enough resources to go around any more and so those fields that are generating more tuition revenue are blessed with more resources, while those generating less revenue see their budgets declining. That’s the inescapable reality of higher education in 2014.

What does this mean for the future of our discipline? It means that in the near term we shouldn’t be surprised to see tenure  lines at the most research intensive universities being shifted away from history. Unless those faculty who remain agree to teach more undergraduates (unlikely in most cases), those large departments will either become smaller still, or will begin relying on ever more contingent labor for their undergraduate teaching.

More worrisome than any possible decline of the biggest and most research intensive history departments is the on-going gender problem we have at the undergraduate level. If we don’t start coming up with new ways of thinking about that long standing problem, we’re all in the same boat — a boat that has sprouted more than a few leaks.